There is this mural down near the park with the slip of beach next to the boat launch that depicts the history of Victoria Harbour and the surrounding region. From what I understand, it’s only about a year old and is part of a larger project to celebrate Canada’s 150th that also included one each in Midland, Penetanguishene, and Lafontaine, three other small communities (not so small as The ‘Harbour, though) skirting the shore of Georgian Bay in North Simcoe. It’s from that, and the many little plaques scattered about the village, all diligently absorbed when we’ve stumbled upon them, that I know my Harbour, boi t’under.

It sits on a triangular peninsula that is at least half still woodland and summer cottages. Though the highway did, I was told, once go through the centre of town, it now skirts the southern edge so that if you are in Victoria Harbour it’s because you meant to come here. Nobody passes through on their way to somewhere else, and that’s helped it maintain its wonderfully quaint nature. That, and the limited space on the peninsula restricting willy nilly expansion. Where a large lumber mill used to sit is a big marina and a rather chichi townhouse development where a lot of BMW’s and Audi’s and hybrid whatsits sit in the driveways, folks living in the relative peace of a tiny village on the water but commuting to their lawyerin’, docterin’, maybe their bankerin’ jobs in bigger centres like Barrie and Toronto. What was once a CN Rail spur corridor is now a very lovely biking and walking trail that Rix Rocket, The Rescue Dog, and I have explored a wee bit of. There’s a grocery store, a liquor and beer store, a town library and post office, a convenience store, and a whimsical cafe that is also a hardware store (I freaking love that) all within about half a square kilometer that pretty much constitutes the village core. A farmer’s market sets up near the library every Friday during the summer and you can walk everywhere, which is helpful since I lost my car some months ago. Who the feck can afford insurance these days anyway?

Though it might sound playfully Nantucket-ish, its roots, and still much of its current nature, were very blue collar. It was built in the 1880’s as a company town by the Victoria Harbour Lumber Company. At the height of operations there were three mills along the shore here, that railway branch line I mentioned with a company train station, a company store, a company hotel, a town library (company-owned), and company-built houses for company employees that were almost all painted canary yellow with white trim – company colours. A few still are. Nowadays the population is a good mix of those commuting professionals (not necessarily all docterin’ or lawyerin’), many retirees, and low-income folks like me who would be more seriously struggling in larger, more dense, urban areas.

Actually, considering Nantucket’s own industrial origins, whaling instead of lumber, and how it is now, maybe the comparison is really not so far off.

Though rumour has it the local constabulary consider The ‘Harbour less than a pleasant, quiet little village, cops and medics tend to see places through the smoky filter of the calls they’ve attended, the stress they’ve experienced there. I’m okay with accepting that it has its dodgy bits, but its so much more as well. To be perfectly honest, in the four months I’ve been here I’ve only ever seen one police officer, and she was sitting in the parking lot of the St. Mary of The Assumption Catholic church yammering on her phone. So far, I’ve never seen an ambulance, but they were almost weekly visitors to the apartment block I lived in before. The only sirens I’ve heard are those passing on the highway just outside of town.

The building that was the company store is still at the main crossroads, now housing The Village Mercantile, that cafe/hardware store I mentioned, and though its the offices of a design firm now, the big red brick building with the white cupola that was the original town library sits across the street from it, as clean and lovely as it was in 1888. The current library is in a smaller, more modern building tucked in behind. Early spring mornings you’ll find many folks launching their little skiffs to go fishing in the bay, parking in the extra large trailer spots the municipality provides them near the boat launch. You can hear geese honking, loons calling, and more than a few times I’ve seen fox kits playing on the grass of the park near their den in rocks by the shore. Before it even opens in the morning, the old folks (of which I will be one soon enough) gather by the door of the cafe for their daily klatch. Others gather daily by the liquor store. It is what it is, I suppose.

I am certainly not perfect. I play a good game, put up a great front sometimes, but I’m flawed and cracked like Kintsukuroi pottery. The ’Harbour is like me, that way (and anyone, really): Beautiful in its own unique way, whimsical even, creative but not expressive beyond it’s comfort zone, and often forgetting to take its high blood pressure medications.

So I think, and not just because the streets are plowed promptly and the township clears the snow from your sidewalk so you don’t have to, that we may stick around for a bit if the place will have us.

Did I tell you there’s a lighthouse tucked away in the woods down a path at the end of my street? How cool is that? 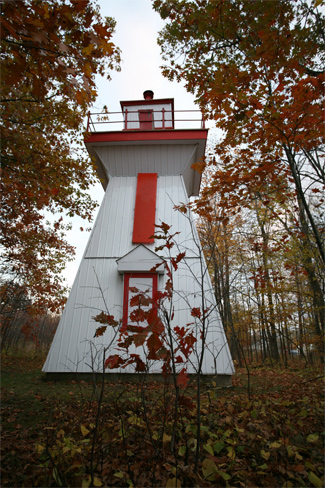