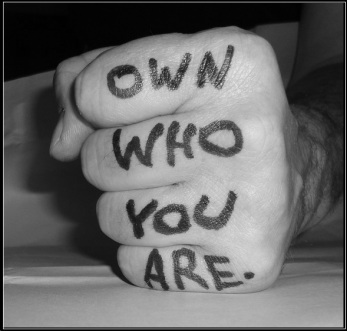 As a young man, I was always creative and inquisitive. I was an artist, a writer, and I read voraciously in so many different genres not to purposely enlighten myself, but out of simple, pure, interest, and joy in the love of words. I dabbled in photography, and had my own wee darkroom set up in a closet once. At twelve I’d been writing longhand prose on legal pads for so long that my mom bought me a portable typewriter for Christmas, and it was the greatest gift ever until at fifteen she gave me a drawing table and the two fell into competition for that title. It wasn’t until much later in life, after I’d had a novel published and realised that the industry really wasn’t about the art but the product it became, that I decided to become a paramedic. I wanted to make a decent living, and driving a taxi while furiously trying to be the next John Grisham wasn’t going to cut it.

That’s the most obvious and outward part of who I was before developing PTSD, the part of me that I identified mostly as, but of course we’re always more than one thing. I was a kind person I think, though more as a general underlying layer than in the more pro-active way I am now. I read philosophy and asked questions then, as well, but again, was far too easily distracted by a pretty girl or another great adventure, and boy I had a few of those (the adventures, I mean). I am pretty sure I was a good person, growing into a good man, but it’s hard for me to say that without feeling like a pretentious dickwaffle. All for the good of the point, I suppose. You are certainly not me, at your core or on your skin, despite that we may share qualities like kindness or creativity or the need to question the universe, because of course nobody is. We’re all hybrid products of both our genes and our environments and I do believe that which of those takes precedence in the development of the adult person is whichever is fed more.

In addition to all of those things, I am still a paramedic (non-practising), a title I re-owned recently after a very long time trying to forget it. Because of that, I am a person with a mental health issue, specifically, complex post-traumatic stress disorder and all the wonderfully worst bits that the thing comes with. More than a few times I’ve referred to myself as the poster boy for how bad it can really get without killing yourself, but that might’ve been my ego at work, I’m not sure. For a long time after the injuries and the resulting disorder that followed, much of who I was seemed lost; A distant, pleasant memory. While still working (and suffering) I could not start any major creative project that could not be finished in one sitting, and I still have trouble with that. I cared not a fig for my fellow man because I was suffering horribly, and once even tore a strip off one guy selling newsletters to support the homeless when he accused me of that very thing.

Not my proudest moment, and to emphasise how bad it was, let me quote you what I said to him because I can remember it verbatim even now. I said, “I have a good job because I worked hard to get it and I work hard at it. Maybe you should get one.”

Yeah, I told a homeless guy to get a job.

By that time in my career, I’d also stopped stocking the ambulance with extra blankets to hand out in the winter, something I did for a long time early on. So did that mean the person I was, the artist, the softer, gentler, kinder me, had been lost? Had he been deleted and written over by this callous, often angry man, who hid in his house drinking too much when not wearing a uniform and being an asshole to the world at large?

Although I’ve said this in another post (Common Misconceptions About PTSD), it bears constant repeating for those who may wonder the same thing about themselves: PTSD does not change your basic nature. Its effects are debilitating, especially in how you manage your day-to-day dealings with life outside your skin and certainly under it, but your essential being, your centre, always remains intact. You’re a thick steak seared on an extra hot grill, charred on the outside, cooked below that, but still pink in the middle.

The core of you is who you are. Who you are does not change. Your personal truth remains.

So I am writing again pretty regularly now (can you tell??), and I’ve even started a new fiction project that’s a much longer-term affair but that’s been difficult still. I am asking questions of the universe (can you tell??) and I’ve crossed the street to give pocket change to a panhandler when I had some not to mitigate my shame, but because it’s a good thing to do. I am still here, even as I jump at simple noises or Amber the amygdala sees threats at every turn. The simple things of daily life are still exorbitantly difficult without help or active thought, but I can read a book, sketch a bird.

My centre held, and what wonderful thing that was to discover.

6 thoughts on “The Core of You”